Tommy Black: Alright, it’s Five (or More) Questions with Tommy Black. I’m speaking to one of my favorite bands: Yachlety Crew. Who am I speaking to?

TB: “Sailor Hawkins on drums,” that’s a great name. Tell me some of the other band members’ names.

SH: We’ve got Mr. Philly Ocean on lead vocals; we got Tommy Buoy on guitar; we got his brother David Buoy on percussion and vocals; we got the third sibling in that little trifecta that’s Baba Buoy on bass; and then we got Mr. Stoney Shores on the keys; and on the saxophone we have Mr. Pauly Shores, his brother.

SH: We’ve got a few brothers in the band.

TB: Exactly. Sailor, if I may call you Sailor, how did you guys start doing this?

SH: I get that from all the guys, Tommy, I’m not going to lie to you.

TB: “Hello, Sailor.” How did you guys start doing this?

SH: You know, my partner Baba Buoy and I we were playing music and a couple of other things and we kind of felt like we were hitting a wall creatively, maxed out on some other things that we were doing, and we felt like we kind of wanted to do a soft rock thing as a side-project. I know everybody uses that term “side-project,” but we thought is was going to be just a swanky little bit. It wasn’t really a joke; it was serious, but we thought if we could be as successful as Murph and the Magic Tones from the Blues Brothers that would be cool. We’ll do a little smoky Holiday Inn off the side of the road driving out to Temecula or something just for shits and giggles because we can. We did it, and we kind of came up with a band and we thought “you know what? There’s kind of this more unique soft rock which has been coined ‘yacht rock’” – Sirius Radio came up with that Yacht Rock station – it seems like all the chips were falling in that direction with the kind of music we decided to play, and the next thing you know we booked a show and somebody saw it and said “I want you to play at my place” and we played there and it was one after the other after the other. Now the phones don’t stop ringing and people want to book the band next week for their 50th or 60th birthday party but the band is booked up right now – somebody just called us about a date in December 2019. The band is booking 8-10+ months out right now. We’re pretty much booked solid out through September of this year.

TB: And you do the booking yourself? Or do you have an agent?

SH: No, we do it ourselves.

SH: We’re at the point where we’re going to start losing more air if we don’t find someone to start handling this because literally between the two of us – there’s seven members in the band but a couple of us handle the business – and it’s a band, there’s no hired guns, everyone appreciates leadership and camaraderie and it works out really well.

TB: And you all have great facial hair.

SH: Some of us have more than others.

TB: Don’t worry about losing that, that’s not going anywhere. But cool, it’s cool that it is a family and it shows. I’ve been there many moons and seen many bands and my leather heart is softened when I see you perform. You guys are amazing.

TB: And everyone is so happy. You have a list, you don’t do requests, but you have a setlist. What’s everyone’s favorite song, Hall & Oates you think?

SH: I think “You Make My Dreams Come True” gets a big reaction. “Africa” by Toto – you can go on the internet and look up a hundred different reasons why that’s the best song ever written.

SH: “Sailing” by Christopher Cross. Tell me that is not a guilty pleasure song.

TB: Not to mention the on-top-of-the-bar sax solo, that’s amazing.

SH: Yeah, exactly. Also, when Tommy Buoy gets up to the mic and he’s got a low baritone voice and he sings “Kiss You All Over” to the ladies. They go crazy for that.

TB: This is true. I sing it constantly. Why is there no Bee Gees in your set? Is Bee Gees not technically considered soft rock? It’s disco but isn’t it a soft rock crossover with Bee Gees at all?

SH: Yeah, it’s soft rock but it’s a little more disco, and that’s the thing too is we really try to hone in on what is more that “yacht rock” thing. There’s plenty of soft rock – there’s Air Supply. It’s the late ‘70s early ‘80s, songs like “Baby Come Back” and we don’t want to steer too far away from that. There’s other bands that are kind of starting to pop up that are doing what we’re doing but they’re throwing in Fleetwood Mac and more classic rock and not soft rock or yacht rock. “One of These Nights” is a good example of a song we can play, but if we play “Take it Easy” then it’s a classic rock thing and we try to stay within the parameters that we set.

TB: Yeah, you’re spot-on. A lot of the other bands are missing the boat.

TB: Thank you. Anyway – you’ve never heard that – speaking of that, do any of you own a yacht or plan on owning a yacht in the near future since you’re doing so well?

SH: Well, Baba Buoy has a dinghy but he’s trying to upgrade. We’ll get a few more shows in and I think pretty soon he’s going to be heading out to sea in his new yacht.

SH: I personally am happy to own a house at this point.

SH: World-famous. Legend. Without sounding cocky, and this is going to sound cocky, the room is too small for us, but there’s something to be said for that. Playing that room… the notoriety… there’s tourists that walk into that room and they have no idea what they’re walking into sometimes if they can get into the show as a lot of times its full. When they come up and talk to us – we had people from the Oscars that was just in town a couple of months ago, people in there with tables and bottles, telling us that they just wanted to go the Viper Room but they ended up catching a show that they had no idea was going to happen. They thought they were going to see another punk rock band.

TB: But the whole crowd is wearing the hats. Everyone is having so much fun. It’s so cool. it’s beyond. it transcends cool. You remember they had those K-tel albums? I remember I bought a Convoy album as a kid in Ohio and it was none of the original artists playing all Convoy songs from the movie Convoy. But I ended up loving it. Are you guys going to do a Yachtley K-tel type album, or have you done one?

SH: I don’t know. That is a good question. We just wanted to entertain and take that as high as we can. We toss around different ideas for song titles and song-writing. These songs that we play aren’t necessarily the easiest songs to play, either.

SH: With all due respect, it’s not like pumping out a Green Day cover or a Nirvana song. There’s some pretty complex parts, even for the drums. I didn’t think I was going to learn Jeff Porcaro stuff – I’m a rock drummer. I had to go back to the books a little bit. Learn some new tricks.

TB: You guys do them so well and so spot-on that I think they should be documented.

SH: I appreciate that and I believe it myself, but it’s a real testament when some of the original artists come up on stage and perform their songs with us.

SH: The singer from Player, Mr. Peter Beckett, came up and played with us a couple of times. He sang “Baby Come Back.”

SH: As many times as I’ve played that, you get a little on-edge when you see the guy coming up. You think you’re doing his song justice, but now the deciding member of the jury is coming up to play it with you. It’s a real honor that some of these artists are still around. Elliot Lurie from Looking Glass came up and sang “Brandy” with us one night at a show.

SH: That was some pretty cool shit, I’ll say. Can I say shit?

TB: Yes, and the shit doesn’t get much cooler than that. What goes through your mind, what are you thinking when you’re up there?

SH: The one thing I really enjoy doing in my life is making people smile. I want people to have a good time. When we’re entertaining people and you see people having fun, whether they’re dancing, singing, holding their cellphones up, getting closer to the stage to take a selfie with the band member as he’s playing. That fun positive vibe. We don’t have fights at our shows, you know what I mean? Our demographic is cool because they’re older, they’ve got a little bit of money. They’ll buy a really nice bottle of wine and at the same time they’ll go to a punk show. So we have a really great demographic of people. There’s no negative, it’s all positive. It’s all good love at our shows and it’s fun. It’s really fun.

TB: Yeah, it is. I always look forward to your shows and I will be there for the next show. I’m going to end it on that.

TB: I’m always there when you play. I think I was there for your first show at the Viper Room. You guys are always spot-on every night.

SH: We love you Tommy. 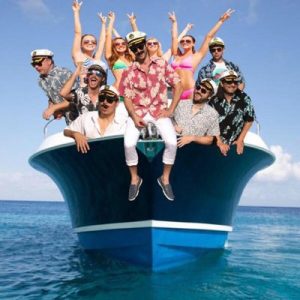 SUBSCRIBE TO THE VIPER ROOM
copyright ® 2017 the viper room