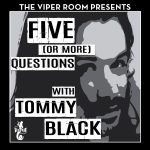 This Saturday, August 15th!  (DE)TOUR Virtual Music Festival 🤘Presented by Morrison Hotel Gallery and Rolling Live Studios & benefitting NIVA and MusiCares, this festival is co-hosted by @allihagendorf & @matthewpinfield and is going to be legendary. Don’t miss out. Get more information @RollingLiveStudios!

• Scream working on material for a new record
• Playing with his brother Franz Stahl for almost 40 years
• His father managed bands when Pete was a kid such as The Hangman
• Pete used to work production at the Viper Room for 12 years on and off
• Neil McDonald from Viper Room production getting him into Rival Sons camp
• He would be opening for Aerosmith right now with Rival Sons if not for COVID
• Pete met his wife at the Viper Room
• Playing in Earthlings? with Dave Catching and recording at Rancho De La Luna
• Recording on the first few Desert sessions with Josh Homme and Dave Grohl
• Dave Grohl only being 17 when playing in Scream and not being able to get into the clubs
• Dave Grohl Joining Nirvana after Scream
• MusiCares has helped a lot of his friends over the years
• NIVA is helping the venues
• Tenacious D residency on Sundays.  So Pete telling Dave Grohl how great they were
• Pete brings Dave on stage to meet them, and Jack Black freaks out
• He remembers Harry Dean Stanton, Prince, Eric Clapton and Elvis Costello playing at Viper
• The night Robert Kennedy Jr spoke at Viper
• Opening for Black Sabbath with Rival Sons
•Ozzy and Sharon Osborne asking Todd Ogren from Rival Sons if they wanted to open for Black Sabbath

SUBSCRIBE TO THE VIPER ROOM
copyright ® 2017 the viper room